One thing that I really miss being gluten intolerant is Italian food. I love pizza, spaghetti,  and lasagna. What I didn’t like about these foods is how carb heavy that they could be. When I was living in New York it seemed like these foods were about all that I would eat and I gained a lot of weight on it. At one point I weighed around 240 pounds.

Since going gluten free it had been about 6 months since I’d had any good pasta dishes. I’d tried some gluten free pizza several times but I didn’t really like any of it although Papa Murphy’s makes the best that I’ve tried.

The hardest thing about spaghetti squash is learning how to cook it. It has a nearly impenetrable outer skin and has the density of a black hole. Once you get it figured out though it makes an easy meal. It takes about 10 to 15 minutes of prep and close to an hour of cooking. You can use the time it’s cooking to watch a show on Netflix, prepare some delicious sauce, do some laundry and whatever else you want to get done. So without further ado here’s how to cook spaghetti squash:

2.Put the spaghetti squash in the microwave 5 to 10 minutes. Make sure you poke some holes in the skin with a fork to avoid an explosion.

3.Cut in half with a long knife. It’s still not easy but it’s easier than cutting without microwaving it.

4.Scoop out the guts. You don’t want any seeds in there

5.Spread coconut oil and sprinkle salt and pepper on that bad boy. I find coconut oil helps prevent the individual strands from getting dried out during cooking

6.Place on a baking sheet and throw in the oven for 55 minutes. 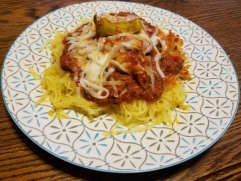 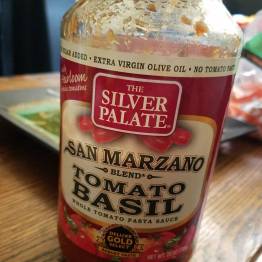 This sauce by the silver palate has no added sugar and is delicious! 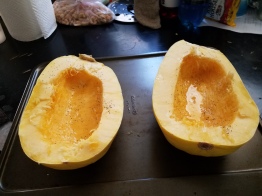 Have fun and be creative. Here’s just some of my spaghetti squash creations to give you some ideas. Make this recipe your own. Always remember that healthy and delicious is very possible. Have fun satisfying your Italian craving!